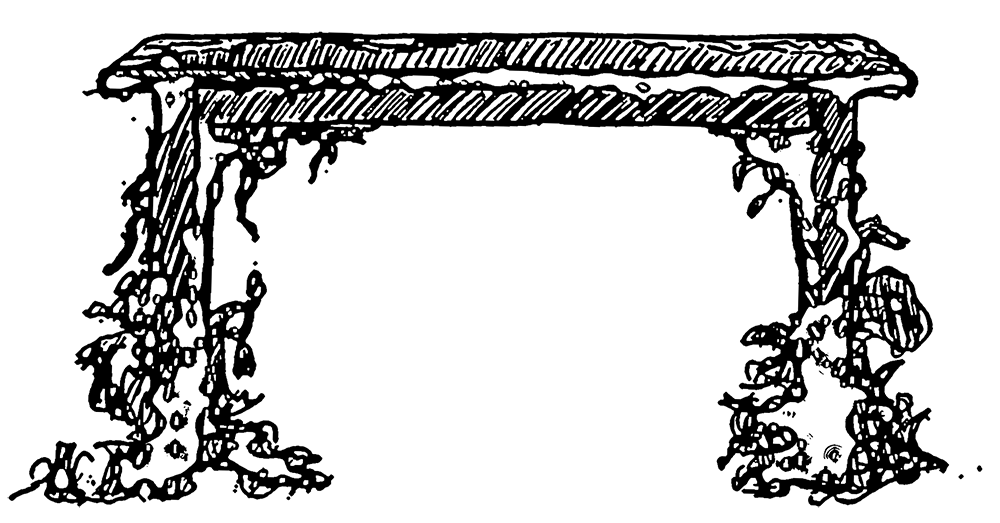 Based on the furniture of the Shakers—a Christian sect from the 18th century in England that attempted to separate themselves from the “outside world” and to create a heaven-on-earth—Britt Gudas’ elongated gothic table is the narrative of a failed seance. Shaped like a coffin lid, it tells us what modernism never understood about itself, that, like the Shakers, modernist design is a celibate practice, lacking “mystery and emotion, [and] a little too frank about the limits of human nature [while] never preparing us for our eventual end.”1 Therefore, this is a subversive attempt by Gudas to turn the mundanity of zealous modernism-before-modernism designs into something uncanny and possessive.

The uncanny we must understand in the German and Freudian sense, as the Unheimliche—the ‘unhomely’—and therefore as something that “isn’t new or strange, but something that was long familiar to the psyche and was estranged from it only through being repressed.”2 The table’s Gothic nature stems from theorist Jack Halberstam’s definition of the Gothic being a “rhetorical style and narrative structure designed to produce fear and desire within the reader [...] emanating from the vertiginous excess of meaning [...] a rhetorical extravagance that produces, quite simply, too much.”3

The table is somewhat familiar, but its short width makes it difficult to conjure and imagine what could be placed on top of it therefore attributing an eerie aura to it. Is this a tiny dining table? An uncomfortable pub table? Most would say no to anything other than a foyer table to place decorative objects such as candles or a vase with flowers—in other words, a table to be forgotten off to the side of some room of some building. Maybe that’s because a one-to-one design of the Shakers’ boring celibate culture makes it practically useless in the present day. Yet we can’t deny that this table is all dolled-up in gothic tropes, and considering goths are not known for their utilitarian tastes or interests, let’s force it to be something for a goth—a seance table.

Completely submerged in glossy black resin, the coffin lid shape of the tabletop becomes a reflecting pool in which during a seance the beveled edges are the threshold that distort your reflection of the physical world and enclose the center of the tabletop which perfectly reflects your desired otherworldly image. This doubling of ourselves reinforces the uncanniness and eeriness in this work. But a seance for what? With dust particles drowned and embedded in the resin, this table implies that it reflects on the ‘then’ and ‘there’ as opposed to the ‘here’ and ‘now’. According to historian Celeste Olalquiga:

The dust that falls on modern things is the decay of the aura, the decomposition of a previous era that, like the tons of shells and detritus that continuously sink to the ocean bottom, creates a new layer of sediment. The dust of modernity, a mix of boredom and death, is the most tangible aspect of the new historical time, a thin patina of shattered moments remains after the frenzy of multiplication has subsided or moved away. [...] Dust is what connects the dreams of yesteryear with the touch of nowadays.4

In addition, the legs of the table are entangled with vine-like ornamentation almost reminiscent of dust’s cousin, ash, or more specifically in this case, volcanic ash and all of its pulverized rock, minerals, and glass. This classifies the table not as an object but as an environment—an open field in which all sound seems to fade except the faint tapping of falling dust and ash. Again, all of this states that the table has a history or rather is built upon histories, consuming them to feed its dark abyss like the swallowing gravitational pull of a black hole. And this is where the gothic fear comes into play. Standing and hovering over this tall reflective table, your (floating) head and ceiling background are littered with the permanently drowned dust. This otherworldly reflection is permeated with the past, meaning it is attempting to turn your physical presence into an out-of-body experience—you watching yourself watch yourself in this black hole reflecting pool. With the table as an environment, the intake of our reflection becomes so “vertiginous” that we inevitably are twisted and warped into the objects meant to rest on this table.

Does this mean the table is some sort of capitalist structure for objectifying us? Yes and no, for I believe this table is attempting to deconstruct pop culture’s exhibition of desire. Unraveling Jean Baudrillard’s book Seduction and the statement “if God is masculine, idols are always feminine,” theorist Mark Fisher states, “the traditional problem for the male in pop culture has been dealing with a desire for the unattainable [...] The complementary difficulty for the female has been to come to terms with not being what the male wants. The Object knows that what she has does not correspond with what the Subject lacks.”5 However, all is not lost as Fisher points out that the pop star and goth artist Siouxsie Sioux (from the band Siouxsie and the Banshees) dealt with this dilemma by making art out of her own objectification by a “denial of interiority [...] not interested in ‘spilling her guts’ in a confessional wallowing [nor] demanding R.E.S.P.E.C.T. from her bachelor suitors but subordination, supplication.”6 Siouxsie realizes, like her contemporary Grace Jones, that ironically she has all the power being an object rather than a subject, that idols “do not reproduce, but arise from the ashes, like the phoenix, or from the mirror, like the seductress.”7 In simple terms, this isn’t necessarily a feminist read of Gudas’ gothic ashen mirror table. Rather, Siouxsie and Grace Jones are proof of Goth’s ability to subsume a culture’s negativity and use it to its collective advantage as a means of bewitchment. Gudas wants us to stare at ourselves until we realize we all are being objectified and that we have the power to reclaim that negativity.

But how? As we return from the otherworldly center of the tabletop and cross over the bevel threshold and back into reality, our floating head is reattached to our physical world self. And with the reflection of the room’s ceiling in every angle that you look into the tabletop, there is constant evidence that you haven’t left this realm of reality and thus any eeriness the table may of had dissipates to reveal that reality is haunting you like the invisible omnipresent god of the Shakers rather than you haunting it like Siouxsie’s bewitchment. So, like all of Goth culture—from its impractical fashion to its music’s lyrics—this table and its suggested seance are hyperbolic. In the context of a white cube gallery, wallpapered home, cubicle office, or virtually anywhere else, this table isn’t an unheimliche trojan horse for destroying the homely or subverting pop culture’s desire exhibition. Rather, as a perfect accumulation of Gothic tropes and modernism-before-modernism design, Gudas’ table fits right in with all that we deem safe and sterile and consequently never to be touched or examined again. The dust drowned in the resin, for example, doesn’t remind us that it belongs “to the outside, the exterior, the street, [or that dust] constantly creeps into the sacred arena of private spaces as a reminder that there is no impermeable boundaries between life and death.” It doesn’t cling to our fingertips like the mark from “a messenger of death, [a] signature of lost time.”8 And although our reflection may make us aware of our objectification, it doesn’t direct us toward “the capacity to [annihilate],” a mode in which pop culture becomes caustic to the status quo by “producing new potentials through the negation of what already exists.”9 Finally, the lack of modification or reimagining of the one-to-one replica of mundane modernist design weakens any argument for a forward-thinking aesthetic or discourse through the appropriation of the Shakers’ “ecstatic behavior during worship services.” This is all to say that like the naive teenage suburban goth performing a seance in their furnished basement and mispronouncing the foreign words in Aleister Crowley’s “magick” texts, this table leads us to believe that we’ve found the truth...on the surface.